Why the name Academic Andalusier on instagram? Why is it not called Rianne Engel horsephysio or something like this? I often get the question why my instagram name is different than my company name. I have thought about this. And it's because of Tino..

Every step I took during my career as a physical therapist, Tino was the one leading me to the right path. He made me think outside of the box and formed me into the therapist I am now.

It all started in 2017, I already was a physical therapist for horses and finally had the resources to buy my own horse. I wanted a 8 year old grey andalusian, that was my dream. I wasn't the best rider so a horse with a little experience was something on my checklist. Untill I went searching and after checking out a few grey horses, my collegue asked me to check out this brown andalusian gelding tucked away in a corner called Argentino. I really loved the way he was build and the look he had in his eyes. So I stepped into his stable. He sniffed at my hands an after that he put his muzzle on my shoulder for a freaking long time. It felt special. Like he wanted to ask if he could come with. We had an immediate connection.

I clinically checked him in his body and already saw that he was stiff in his pelvis, but he wasn't lame. After my examination I asked if I could feel him under the saddle. The girls there had trained him for a few months because he came back from another ex-owner where he had jumped a really high fence to get to the other horses.. He had hurt his knee here. The ex-owner didn't want to keep him because of his rebellious behavior. I still wanted to feel him under the saddle.

After saddling him I heard he was only turning 4 in 2 weeks (oops) how stupid I didn't asked sooner. But I thought, fuck it let's do it! After a few rounds with one of the trainers on his back it looked safe to get on. I was riding like a sack of potatoes with loose rains and a big smile on my face. I felt safe on this horse and we understood each other. We cantered through the arena like 2 sacks of potatoes (Tino was very unbalanced just like me :P), but he was such a happy fella. We had fun! I said: 'I think this is the one'.

And yes I knew he had some difficulties in his knee and pelvis but with the work I do I didn't think this would become a big problem. I felt connected to him and we could work together from the ground and under the saddle! 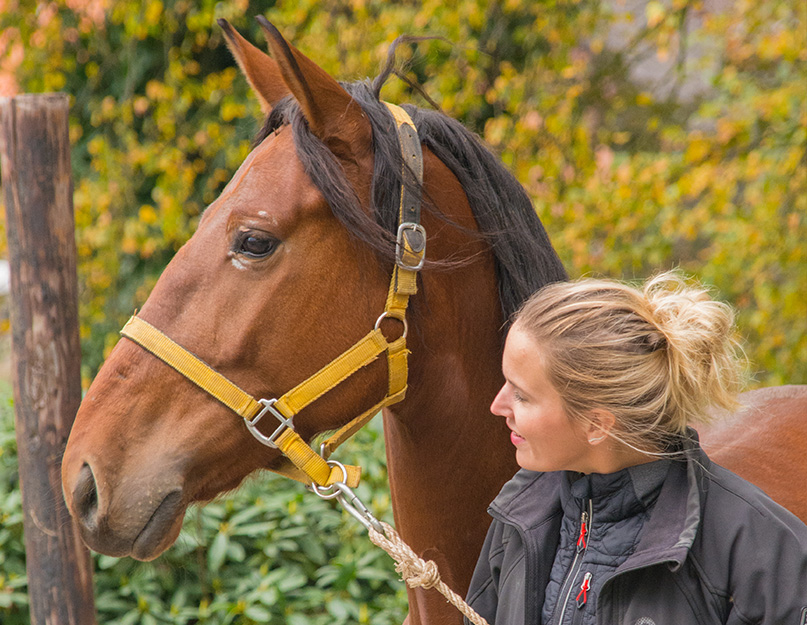 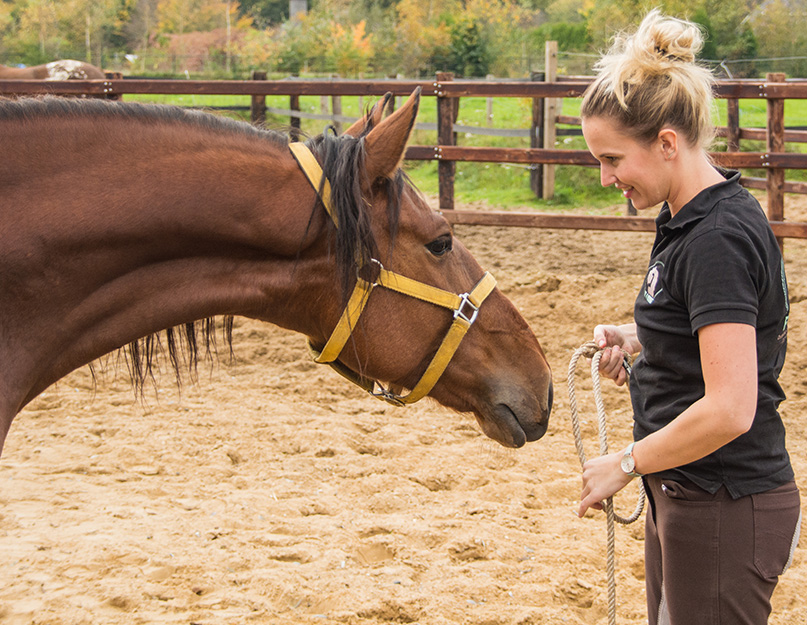 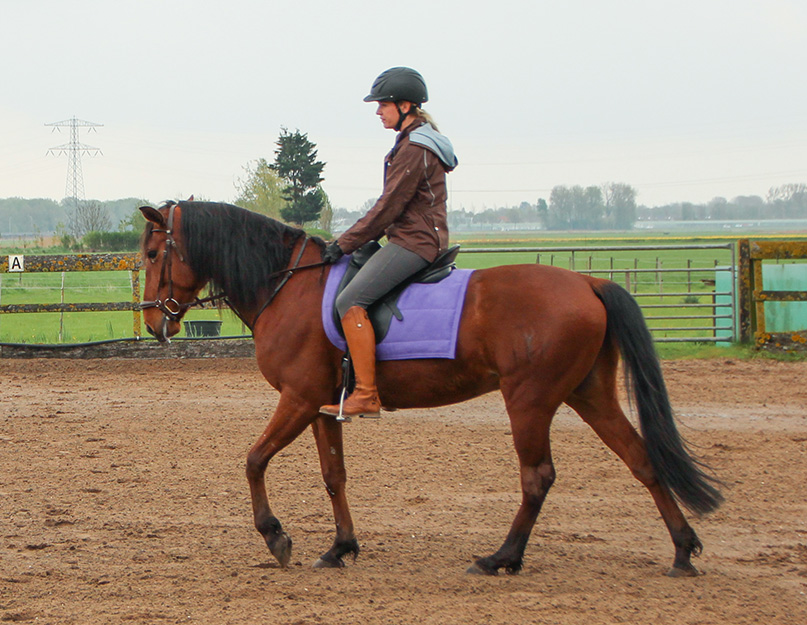 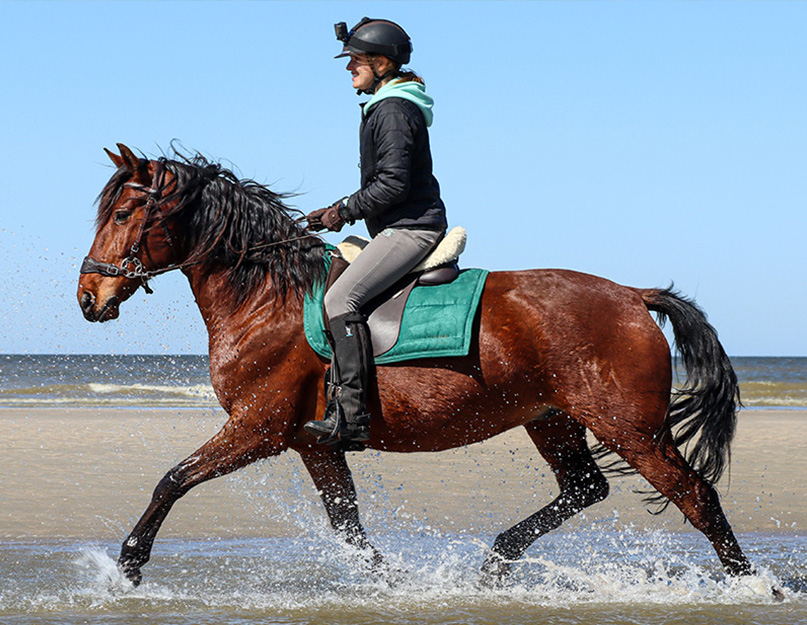 So that's were our adventure started...

I started Tino with groundwork. Groundwork I did based on feel and things I have learned along the way during my study and when I was younger. He did awesome. Our riding wasn't our strongest point... So I took riding lessons from traditional horsetrainers who were only telling me to go more forward and keep still with my hands. Inside leg outside rein!!!!! We were now not going through the arena like a sack of potatoes, but a sack of potatoes with a giraffe neck... It really didn't feel right for me. I hated the bit as well and didn't want to feel Tino in my hands through the reins and the bit. Something the instructors thought was very weird... I stopped taking lessons and searched the internet for other ways of training.

And that's when I saw video's of Greetje Hakvoort and Bongo. The academic art of riding. It looked soft, like a dance with your horse and it felt like a real companionship. So I subscribed to the Human and Horse academy to start the 2 year education with Greetje.

Starting this academy opened up a whole new world for me and Tino. To be honest in the beginning he was a real pain in the ass... for the first 6 months... Everybody in the group was already performing the little exercises on the cavesson and I was still saving my reins from biting Tino, tripping over my lines, saving my feet because of a very pushy Tino... not even able to walk a little straight line. I learned a lot during these months. I took Tino with me once but next to that I felt a lot of different horses from Greetje. These horses learned me how to stay grounded, use my intention and feel and showed me how the exercises must feel like. This was a real privilidge when your own horse is giving you the hardest time 😛

After 6 months we had a turning point and Tino became softer, I got more patience (still not enough though ) and I was able to keep breathing and remain calm. We found awesome intructors who were also in the academy but longer than me and that's where we started to flourish! Greetje was the one who told me to remove the bit and start to explore what it can give us. I never used a bit again after this advice!

Tino has a lot of talent and always wanted to go to fast. Giving difficult exercises without owning the basics :P! We are both over-achievers and I think that's why we clashed that much in the beginning. When I work with Tino now we can alternate between high intensity and relaxation. But I think it's so funny we both like the high intensity the most (and yes I also skip the basics sometimes just to have fun with this dude 😉 and we do a lot of intrinzen inspired exercises so fuck it with correct biomechanics).

The academic art of riding lid on the fire in my horse. He made me so proud and he developed very fast after the first 6 months. The academic work also gave and still gives me so much puzzle pieces in my work as a physical therapist. Almost every horse loves to learn the little exercises that will eventually form to a shoulder in or travers.

That's why I am still using this name. Tino is my proud Academic Andalusier. He is the base of my company logo, performing a levade without me or him even knowing he could do that :p. He is my fire horse that still lets me think outside of every box. That's why my feed is covered in Tino, he is my business card, through him I can show others what I can do for other horses and owners.

We all follow our own life paths. Horses aren't in our lives without a reason. And I am 100% sure Tino is in my life to help me grow as a horse therapist but also as a person. And I love him for that.

For sure he is my soulhorse. He is dragging me through difficult times, I am trying to help him gain more confidence and self worth. Become proud of the awesome horse he is. We grow together. We are no longer 2 sacks of potatoes, I think we are 2 bouncy fire breathing dragons now!! Maybe there will come a name change in the future after all!! 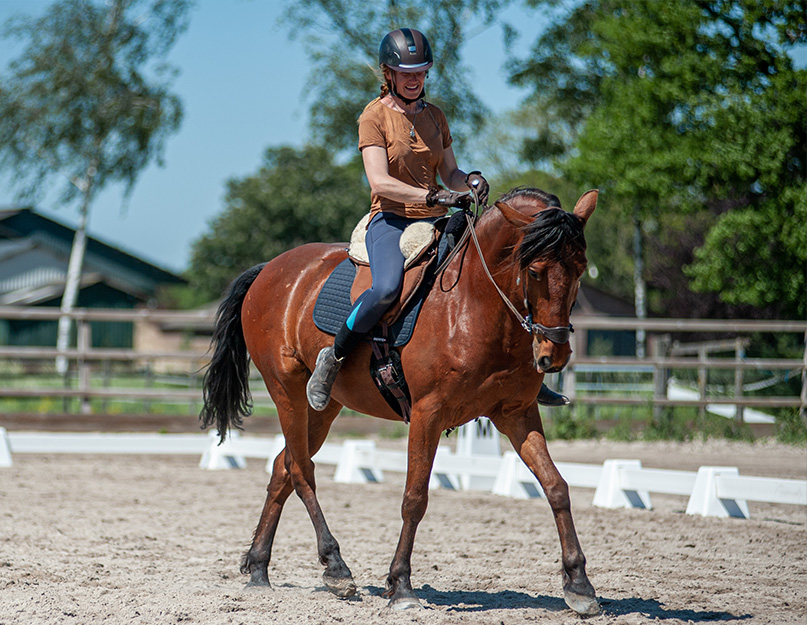 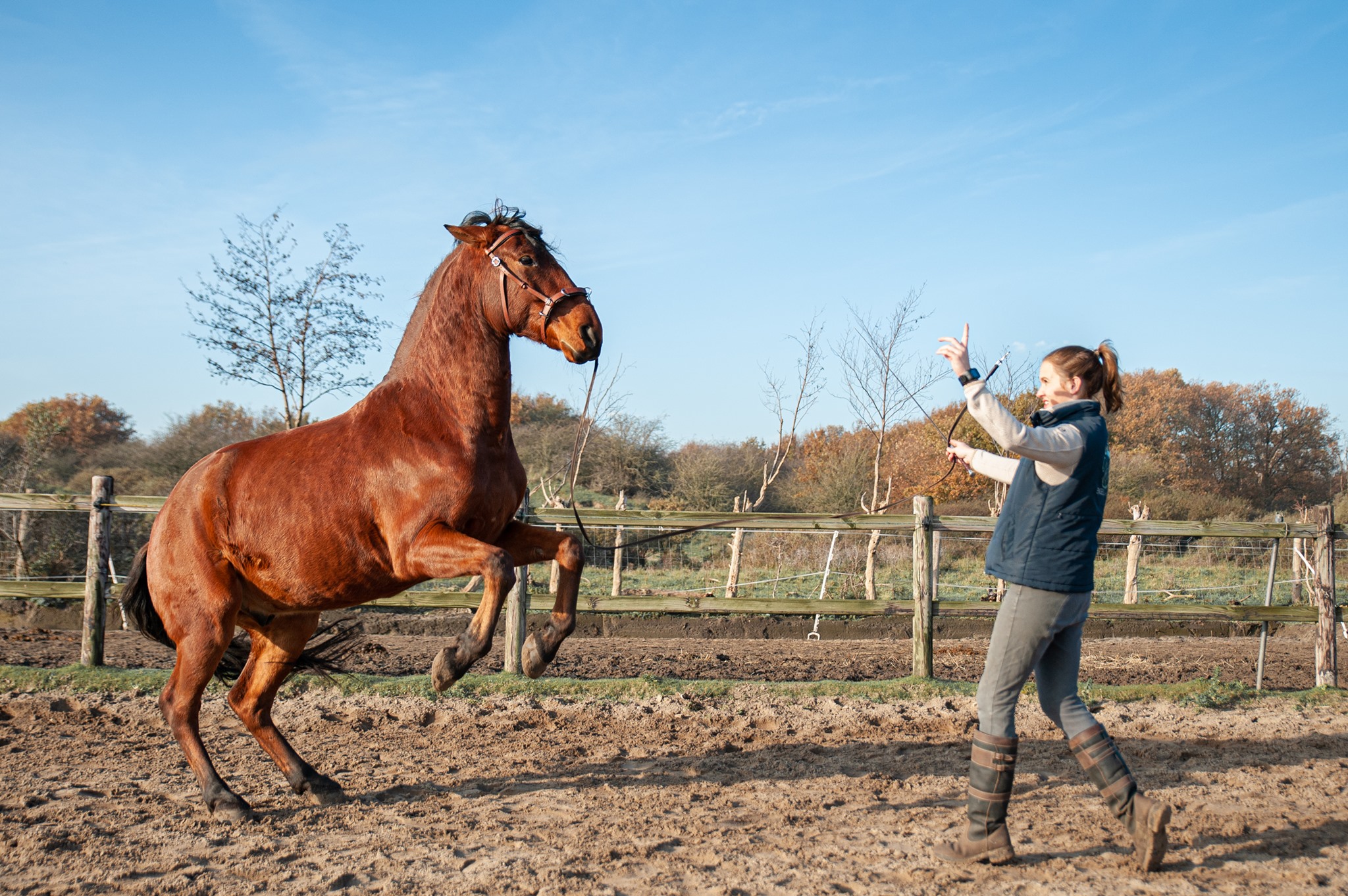 Why still use the name Academic Andalusier on Instagram?!